Budapest has already provided Fancy and I with some unexpected experiences, unforgettable memories and exciting adventures but nothing more thrilling than last Sunday night. 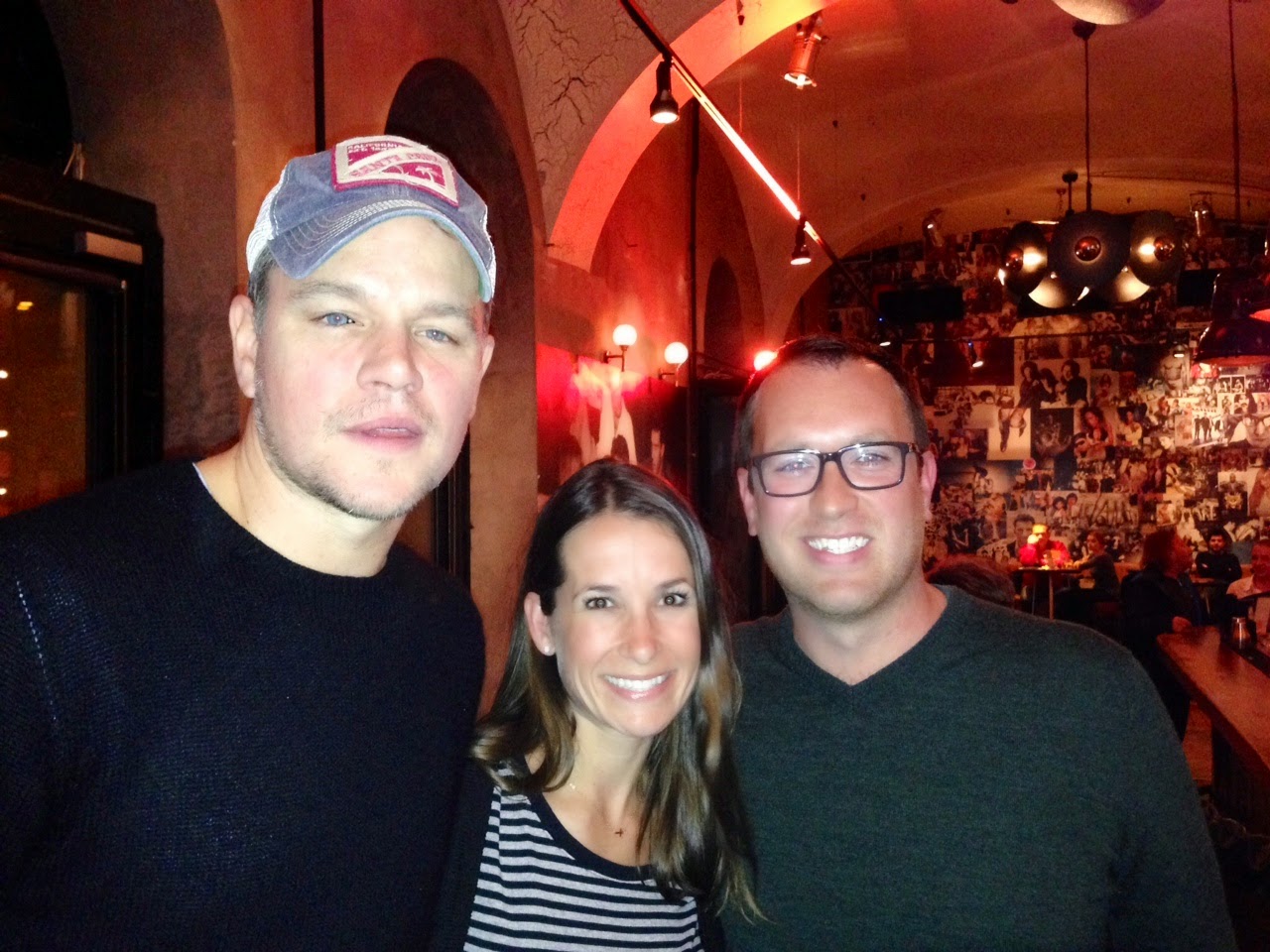 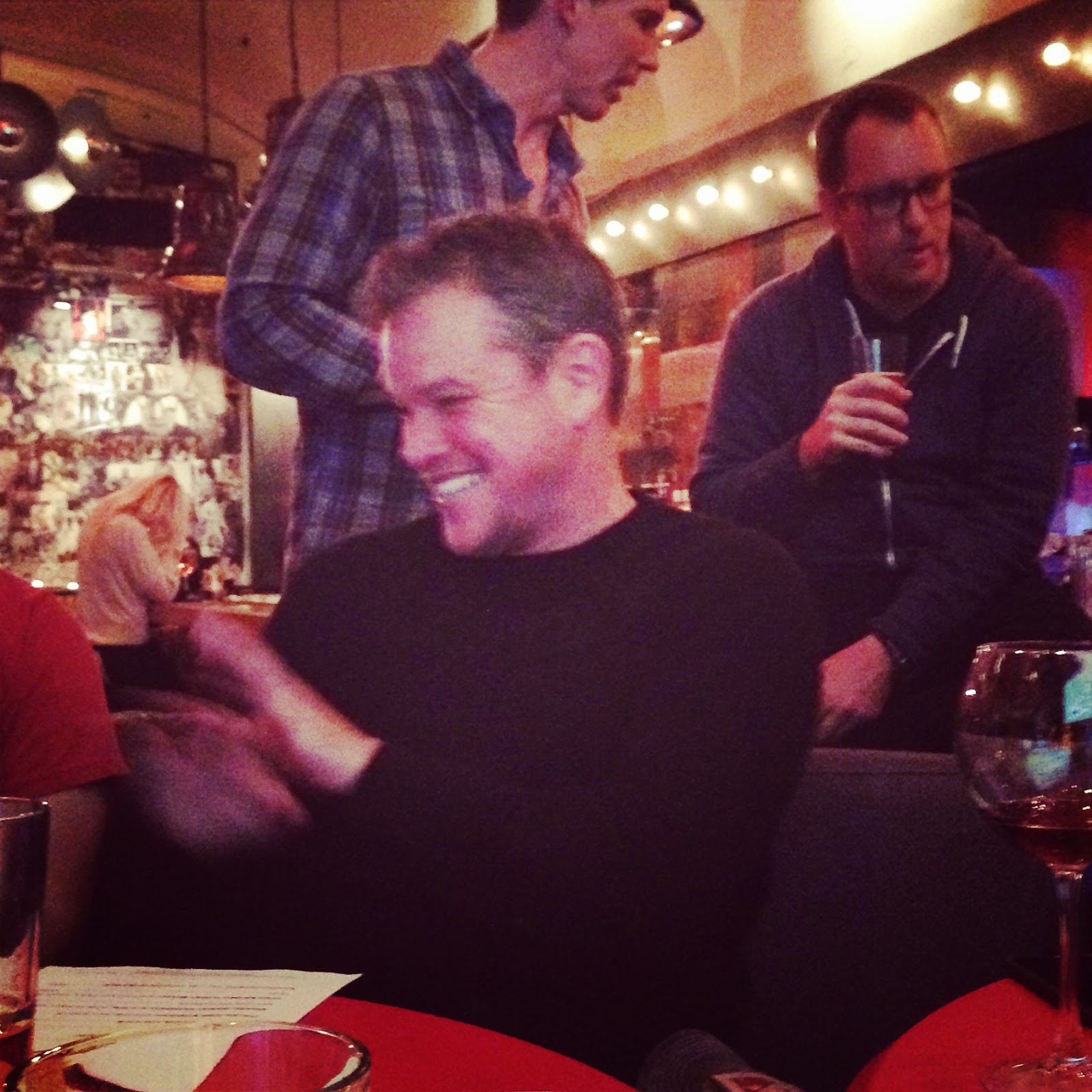 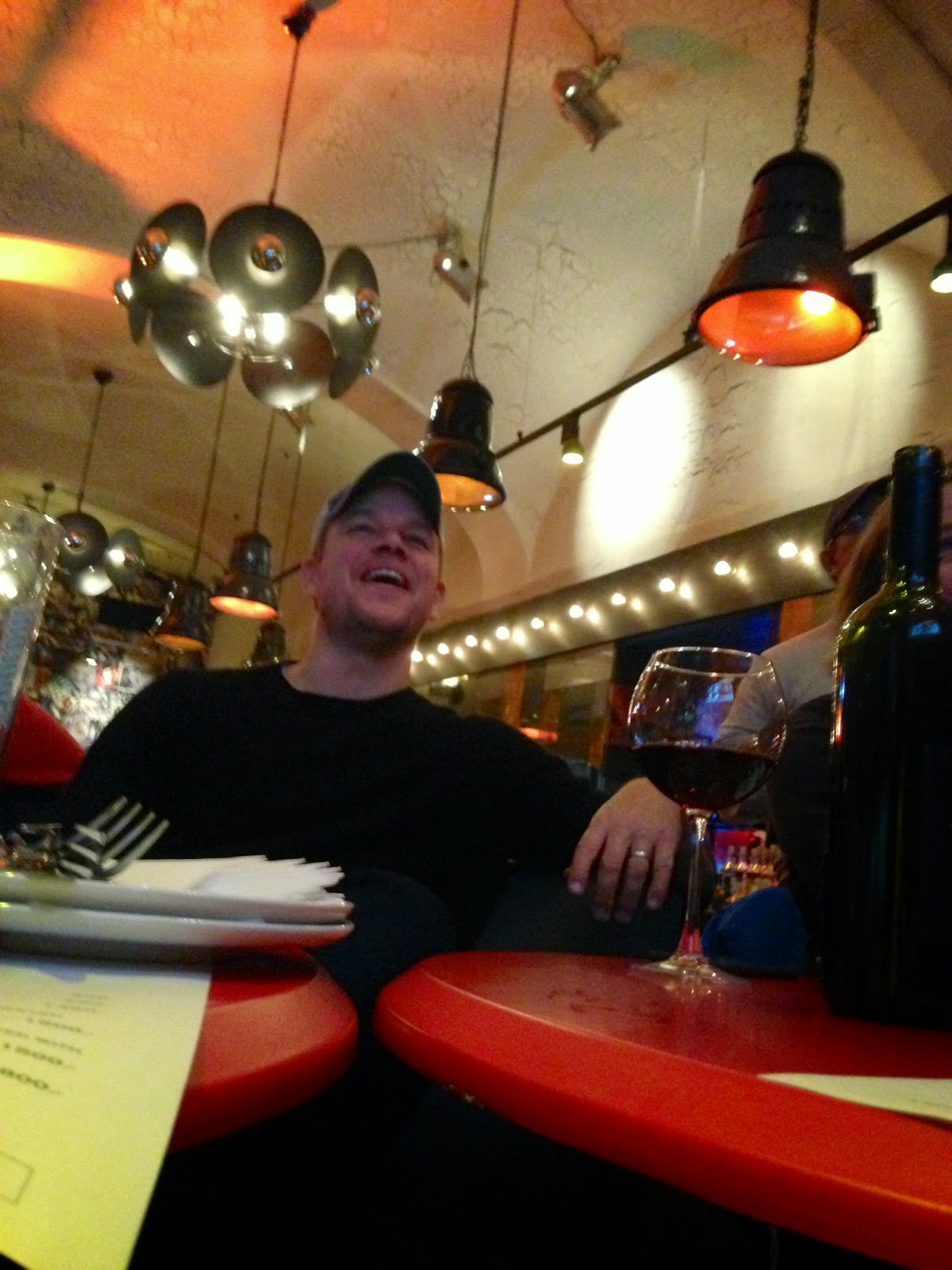 After being invited by a friend from Fancy’s school, we’ve recently joined a small group of friendly expats on Sunday evenings to watch NFL football. To clarify, I actually watch football, Fancy uses it as an excuse to have a beer order some ‘American food’ and socialize since kickoff is usually around 7pm local time.

We were planning to skip it this past Sunday because we had just returned from a long week of traveling (Italy, no, you shouldn’t feel bad for us).  It was almost 7pm and we were both already in PJs and looking forward to relaxing for the evening.  However, tonight I learned that there are actually two things that will get me out of PJs.

Relaxing at home, Fancy and I simultaneously received different messages from our friends already at the ruin pub.  Fancy received a photo she couldn’t quite make out but the message said “the view here is pretty good” and I received a message from my buddy telling me that he was sitting right next to Matt Damon.  It didn’t make any sense to me, because I’ve always told Fancy that Matt Damon is my favorite actor and Good Will Hunting is my favorite movie, but my buddy didn’t know this about me and I couldn’t understand why he would reference this celebrity as a joke (obviously).

“Todd, what is this picture?”

** I was going to write this blog and tell you how cool, calm, and collected we acted, but that would be completely false. **

I look at Fancy’s phone and … OH. MY. GOD. It’s a photo of Matt Damon sitting at the bar where we watch Sunday night football!  It was a moment of utter confusion as I slowly began putting the pieces together.

We aren’t really part of the inner core of the expat NFL group, but we had been before.  We were afraid that by showing up late, we might actually appear like the MD-chasers (that we were unashamedly becoming) but carpe diem….it’s Matt Damon.

One of the people in the group works with with VIP clients at a prestigious hotel in the city and apparently told Matt Damon’s friend about the Sunday NFL-watching ritual. Matt is apparently a big Patriots fan (and personal friends with Tom Brady, because he’s Matt Damon) so he and his buddy decided to join.

He was in town doing some preliminary work on next film The Martian.  Various tax rebates and financial incentives, along with Budapest’s diverse landscape and city views have resulted in several well-known movies being filmed in Budapest recently.  Coincidentally, we actually saw a scene being filmed around the corner from our apartment earlier the same day for a different movie.  “The Martian” is based on the book by Andy Weir (http://www.imdb.com/title/tt3659388/).

We raced over quickly, but attempted to arrive casually.

Fancy’s friend saved her a spot next to her, which also had the prime advantage of being located directly in front of Matt Damon.  I’ve never seen Fancy in such a hurry to sit down.  Also, for some reason, Fancy didn’t seem to mind that her back was against the projector screen for the entire game and she wouldn’t be able to watch any of the action.

We’d met some of the folks before, but there were also some new faces, so our friend began to re-introduce Fancy to everyone.  “You know friend A, and this is friend B”.  As she gets to Matt Damon’s spot at the table, there’s an quick pause and then Matt Damon extends his hand to Fancy and says, “Hi, I’m Matt”.  As I recall there was a sparkle off his teeth, his eyes twinkled, or one of those things that naturally happen to famous people.

Up to this point, Fancy had pretended that we didn’t know Matt Damon was going to be watching the game.  Surely, we weren’t like all of ‘those’ celebrity-chasers. Fancy gave her best Hollywood performance complete with a shocked expression.

It was surreal.  The entire table burst into laughter.

I was particularly thrilled to see that he was drinking Cabernet Franc, one of my favorite wines and one of the many things we have in common. It was clear we were destined to become friends.

At one point during the evening, he tells us this hilarious story of his buddy Ben Affleck (the fact that the story was being told by Matt Damon made it even more surreal). Anyways, ‘Ben just learned a new form of card-counting this his other friend, a Harvard professor, had created’.  These are the types of people Matt Damon is friends with.

Ben spends the weekend in Vegas (Matt was invited, but couldn’t go) and proceeds to get kicked out of each and every casino on the Strip.  His last attempt is at the Wynn; he is quickly asked to quit playing blackjack.  Matt tells us that Ben is pissed and actually calls up Steve Wynn (I guess that’s what you do when you are a celebrity, you just call the man whose name is on the building) and Steve tells him he will fix the problem.  He then promptly calls Ben back 5 minutes laters and says “yep, you’re done, you gotta go.”  I guess you’re not able to argue with the guy whose name is on the building.
You can check out the story here: http://www.nydailynews.com/entertainment/gossip/ben-affleck-banned-blackjack-hard-rock-las-vegas-source-article-1.1777684

Later on in our magical three hours, Fancy and I were amazed when he brought up Micheal Stipe and REM.  For all of our Athens, GA readers:
Matt shared a story about getting dinner with Michael Stipe in Berlin and called him “one of the greatest musicians in our lives”.

Fancy and I were beyond ourselves that not only did he bring up the Athens, GA hometown band of REM, but that he has (had) dinner with Michael Stipe.  It was all we could do to not interrupt his story and shout “We are from Athens, GA! And… this one time we saw him at this fancy restaurant in town and secretly snapped a photo of him”.  Thankfully, we said nothing.

Here’s the photo we took:

At the risk of pretending like I’m trying remember every word he said (which is impossible, because I did try) I won’t recount the entire evening.  However, I think everyone was amazed how completely normal and relaxed he was the entire evening. He sat at a table with a bunch of strangers and watched the entire Patriots game with us, sharing stories, his thoughts on the movie industry, Michael Stipe and REM, Ben Affleck getting kicked out of all Vegas casinos.  Three hours!!

You try to pretend it’s a normal conversation, but it’s not.  It’s a conversation with Matt Damon.

He would save the best for last.  As he said goodbye to everyone, he graciously took photos with anyone that asked and didn’t do it begrudgingly, but always responded “I’d be happy to”.

His buddy that was with him went to pay their tab and chatted for another few minutes before leaving.  The rest of group waited around to smile and chat in disbelief about what just happened.  Finally, someone went to go pay their portion of the bill only to discover that the bill for the entire table was picked up by (wait for it) Matt Damon.

The greatest night had just become better.  He was absolutely the most gracious, humble and cool dude you could hope for.  When my buddy and I told him that it’s really great to meet him in and obviously, we’ve seen a lot of his films, but the fact that he’s a really cool guy in person makes it all even better.  He responded, looking us directly in the eyes, “Hey, Fuckin’ A, thanks for saying that man”.

I only wished we had ordered more Cabernet Franc.
Posted by Unknown at 10:15:00 PM